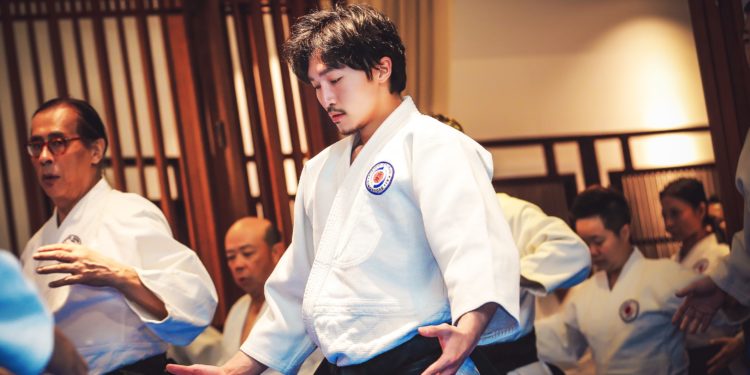 Aikido is a Japanese martial art originally developed by Morihei Ueshiba. Translated simply as “the way of harmony of the spirit”, Aikido focuses on self-defence without injuring the opponent. The techniques are mainly defensive and do not involve punches or kicks. The Aikido practitioner uses the movement of the attacker to carry out pivots, throws or pins.

Established in 1988, Aikido Shinju-kai (ASK) is currently the largest Aikido organisation in Singapore with over 13,000 members from Southeast Asia and the region.

Philip’s two sons, Aloyseus Lee and Alexander Lee, followed in their father’s footsteps and are currently Aikido instructors at ASK. As such, we interviewed Alexander about his Aikido journey. Read on to understand more about Aikido and how Alexander could teach you to live and practise Aikido.

I am a professional full-time instructor at Aikido Shinju-Kai, one of the leading and premier Aikido organisations in Southeast Asia. It is officially recognised by the Aikido World Headquarters in Japan.

Brought up in a martial arts family since birth, I have dedicated a large part of my life to the Japanese art of Aikido. I have been living Aikido for over 23 years. I have trained and lived in Japan Aikido Headquarters Dojo as a Kenshusei, as an Uchi-Deshi (live-in-disciple) under the Founder’s grandson in Tokyo.

Currently, I hold a 4th Degree (Dan) black belt, certified by Aikido Aikikai World Headquarters, Japan. I will continue spreading Aikido to more people for as long as I can.

What excites you most about your industry?

Watching the growth of my students and knowing that their life improves through Aikido, through my guidance and teaching.

Also, to know that our effort has made a positive impact in their life, benefitting them mentally, physically and spiritually. In turn, this aids in the positive development of society.

What do you hope your students at Aikido Shinju-Kai will achieve?

A caring heart, confidence and a healthier mind and body.

By “healthier mind”, I mean a calm state of mindset honed through Aikido training that enables them to see problems and obstacles as opportunity. Basically, a positive perception towards matters. Making Aikido, a way of life.

What’s the best piece of advice you ever received?

The principles of Aikido can be applied on mats and off mats.

My father, who is my mentor, and the Chief Instructor of Aikido Shinju-Kai.

Share with us something you recently learnt that deeply impacted you.

Learning Aikido is not just for self-defence. A large reason is for better mental health, for a better lifestyle, for a better you.

How can people connect with you?

Through Aikido practice together!

Aikido Shinju-Kai’s courses are available at Balestier and Bedok.